The first Porsche cars to compete in an officially sanctioned, championship  Formula Grand Prix were in fact the pair of Porsche RS550 sportscars of Edgar Barth and Umberto Maglioli who took part in the 1957 German GP. Barth would finish the race 12th on lap down on the winning Maserati of Juan-Manuel Fangio. Maglioli however retired on lap 14 after encountering engine problems.

The one and only Formula 1 championship Grand Prix win by a Porsche was achieved by Dan Gurney at the 1962. The French GP that year was  held at Rouen-Les-Essarts on 8 July, and was race 4 of 9 in both the 1962 World Championship of Drivers and the 1962 International Cup for Formula One Manufacturers. The race was won by Gurney, his first Formula One victory, driving a Porsche 804, and the company’s only win as a constructor in a Formula One championship race coming after three years of racing.

Prior to this, there had been two F1 race victories in non-championship events. The first F1 race victory had been scored by Giancarlo Baghetti at the 1st Coppa Italia race, which run to Formula One rules, held in October of 1961 at Vallelunga Circuit. The race was run over two heats of 30 laps of the circuit, and was won by Italian driver Baghetti in a Porsche 718.

In 1962, the 12th Solitude Grand Prix was a non-Championship race run to Formula One rules, held on 15 July 1962 at the Solitudering, near Stuttgart. The race was run over 25 laps of the circuit, and was won by Dan Gurney in a Porsche 804. 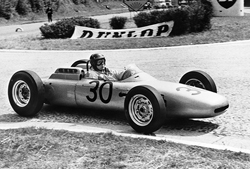